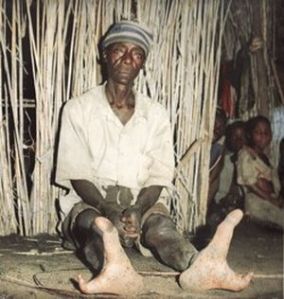 In this inhospitable Zambezi* Valley the Ba Tonka, living in almost remote solitude for eons, untouched by time were resident for well over 9 000 years. Ba Tonka (Tonga) is an ancient word for ‘People of God’. These small and primitive people have the most amazing knowledge of their origins and are said to be amongst the wisest people in the world. According to their folklore, gods visited them from the stars and imparted certain information about the stars to them.

They have knowledge of planets and believe they are descendants of bird-like people* from the sky who landed on Earth many thousands of years ago from ‘Liitolafisi’, the ‘Redstar’ or ‘Eye of the Wolf’, which we know as Mars, the warring and riotous planet of destruction, which according to legend is ruled by the war-god. To this day, some of the Ba Tonka men are born with split feet and only two toes, and have to lift their legs slightly higher when walking.

The Zulus of South Africa are known as ‘People of Space’ and according to their folklore they too once came from a planet that had red soil and a red sky. A miniature replica of the spacecraft that they travelled to Earth in is in the keeping of Sanusi hierarchy. There is much evidence to indicate that African people are not indigenous to Earth. The true beings of Africa are the primordial animals like the elephant that resonate with primordial sound. The vibration that these noble giants give off generates a frequency that sets sound into Nature that initiates energy for new growth. Elephants hold ancient power and strength and symbolise Divinity, and their tusks are known as Wisdom Sticks.

* Zambezi is an ancient Shona word for River of Gold.

Photo of Ba Tonka tribesman with kind permission of Fiona and Jan Teede from their book The Zambezi, River of the Gods’.

Excerpt from my book Returning to Myself.